Ryon emailed me with his direction. I'm pasting it as follows along with the layover sketch he did on my original sketch. 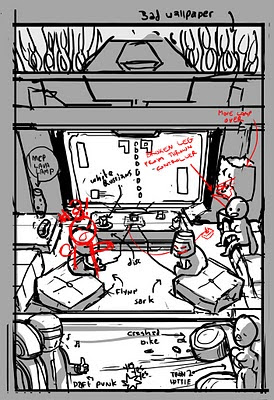 • Flynn or Tron vs. Sark
Let’s make it Flynn, for reasons listed next.

• Giant screen underneath one of those enemy droid things
I had to look this up; it’s called a ‘Recognizer’. I think the placement on this is perfect. Having one serve as a mantle around the TV made me chuckle. I think it would be great if a chunk of it’s foot was missing though, after Flynn throws his remote in frustration. It would be a nice ‘nod’ to the movie. I’ve sketched out what I had in mind. I hope the red corrections don’t bother you. Also, the Recognizers in the movie don’t have connected pieces, were you planning on leaving his pieces spaced out?

Also, maybe the Recognizer could have some empty glasses on it, and some water rings.

• Either pong on an Atari or a multiplayer NES game on a nes console.
I’m torn here. Pong on the Atari is more reminiscent of the Tron graphics, but the NES is like Holy Grail of my generation. Lets stick with Atari, though.

• MCP lava lamp (the spinny CG guy in tron1)
The MCP demoted to the position of a lava lamp. Ha!

• A hottie from Tron 2 trailer in the foreground parlaying with Daft Punk
As an avid fan of Daft Punk, I completely approve of this idea! Though, how about one of them putting the moves on the Tron 2 hottie (maybe he’s showing her an electrical plug suggestively), and the other one could be talking with one of your black and white silhouette girls. Maybe she’s got some Tron glowies on her, but I’ll let you decide how to place her into the scene. I know the stylizations are different, so if placing one of the silhouette girls can’t work, maybe the second Daft Punk guy can be looking at a magazine with a silhouette fold out.

Seeing Daft Punk robot helmets in your painting should be pretty awesome.

• A speederbike tipped over
Perhaps a line torn through the carpet from where it’s tracer path was? This may not convey will in the painting, so leave it as something you can easily remove.

• Wallpaper - something nerdy. I don't know what - something oldschool though. I may even use the wallpaper from when I was a kid in the 80s living in New Mexico.
I’m still trying to think of some wallpapers I remember from the 80’s. Most were tacky floral patterns, but I can’t recall a ‘nerdy’ one. I’m going to defer to your judgment on what you choose.

Possible Addition:
How about a portrait of a Tron family on the end table or coffee table.
I think this is going well. I came close enough on the first pass to not have to start over again... You can expect a new sketch at some point this evening.
&.

Email ThisBlogThis!Share to TwitterShare to FacebookShare to Pinterest
Labels: art director for a day, contest, i must be crazy, inspired by, sketch