eight glasses of water is allot of water to drink.

i've been working out at a local gym. the people there look like magazine people, with buts and boobs or pecs and haircuts straight out of the latest fashion magazines. they have the kind of bodies that make you want a refund on yours.


they wear expensive tennis shoes and say things like " carb intake" and "target heart rate" and "full range of motion". these things mean very little to me, but if i were totally new, i would think them the kind of spells that witches would cast in order to look more sexy than a greek god or godess and give them the power over us "normies" to make us do things like open doors for them or come to a complete stop while they push their perfectly sculpted front and backsides across the pavement at a medium pace.

so the hot one, the girl at the front with the bleached hair and black spandex tells me to drink a gallon of water a day - which is about 8 glasses, so i've been told. and i would do anything short of cutting my flesh for this girl. so i tell her, "ya, i'll drink a gallon of water every day. (if it will make me look like the male version of you that you would want to tie to a bedpost and do situps on my face).

this has prompted me to alter my diet to include those eight cups every day. water used to be good. i used to like it. people need and crave it - yet i go through about eight cups a day. eight slow torturous cups that taste and feel great going down first thing in the morning, and right before bed or after a run or workout, but the other four or five cups are a different story. it's like chinese water torture without the chinese. i don't know if that makes any sense.

at any rate, i keep going through these days forcing water down. i feel like i could float fish in my stomach and they would be perfectly content with always a new place to swim full of fresh cool water. i lean to the left and i hear swishing sounds. when i walk around, there are these bubbles floating up and around down there making "bloop bloop" noises. i girl asked me a few weeks ago if that was my "sounds of the sea" ringtone and i had to answer that it was just my eight glasses.

that's what i've been up to. that and writing a book that is being published as i sip this cool crisp cup of water.

have a good night and take a look at another post-it pet. this one's called "nub worm": 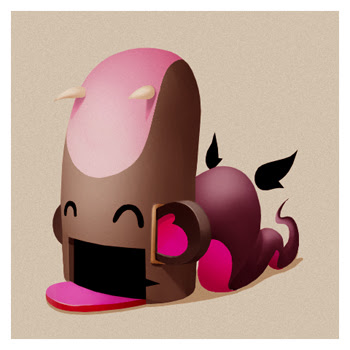 Hey dude -- nice blog. Couple things. First, eight glasses of water is closer to a half gallon than a whole. Second, the mandatory 8 glasses/day is a myth, er, doesn't apply to everyone. I'm from the desert in Arizona and even our doctors out here don't say you have to drink that much water per day (unless you're working outside all day or something). I thought I would chime in though because I used to HATE water. I slowly started getting used to it by forcing it down and now I can't live without it. I just sip from a water glass all day at work. Also important to remember is that it is possible to drink too much water.

That's one of the most informative comments to my blog that i've ever gotten. Thank you, and i will make sure i up water intake according to my routine and not according to hearsay. ^____^

if you dont drink a gallon a day, you could die, fyi.
dpt

I have a quick trick for water consumption. Start off your day with a multivitamin. One of those gnarly ones with 200% RDA on shit you've never heard of like biotin. For your first few trips to the bathroom, your pee should be radioactive green (or some other day-glo color). You'll hit your first water milestone when your pee comes out clear. Figure out how much water it took to get to that point and that's half your water intake for the day!