i was going to give it a rest tonight and play some warcrack before ted told me,

"hey, make sure to bring something cool (art) to work tomorrow."

i can rarely say no to ted's weekly creative meetings, so i did one more of these to bring in tomorrow.

i wish i had something clever or funny to say tonight. lemme think back through the day...

I went to Frys today at lunch.

It's a place that sells things like computers, plastic robots, thousands of DVDs, and impulse buys up to and including wireless light switches, battery operated plastic hand held fans, scotch tape (not from the same place scotch comes from mind you), and sewing kits.

My friends and I ate at the cafeteria where a Fry Employee was feeding fish in the floor to ceiling fish tanks.

First of all, i'm going to have to break to say that the brunette cashier at Frys with the itty bitty waste and the (pardon my lack of creativity) ENORMOUS RACK was absolutely awesome. Although ted said that she was jail bait. And while she sat one table length away, munching on a sandwich in the most jiggly manner possible (thank god), i kept one eye on her collar line and the other on the fish tank, where another impressively endowed employee climbed a ladder to dump cups full of shredded wheat into the murky fish tank waters.

Fishtanks - check
Metal dive suit sculpture in tank of water next to steampunk pipes on the ceiling line - check
Weird photoshop tile ocean themed wallpaper - check
large marble ball in clam shapes waterless fountain (out of comission) - check
For all intents and purposes, they even had super hot mermaids - mind you without fish tails. [(the throngs of cute girls working there) extreme exaggeration]

I had never lunched in Frys. It's not really the best idea for the menu there. Though today was the best time possible due our friends - the fish feeder and the checkout girl hot enough to make me want to tip her the way you see gangsters tip strippers in movies;You know the move - the one where you fold up money into a little vertical taco shape and then slide it right up to the naughty bits while the girl manages to wrap her entire leg around your head like it's a boa constrictor and your face is a mouse.

At any rate, i got all worked up and had forgotten until just about now, but i figured that it could make for entertaining blogness.

If you're in a Frys that looks like the lost undersea city of Atlantis - take an extra look around, there are yet undiscovered beauties trapped in those waters. 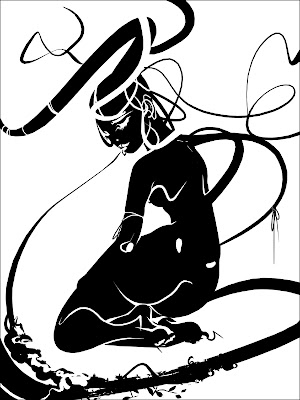 have a good evening.

Your techniques are amazing, especially concerning the female silhouettes. What is the process on how you go about accomplishing each piece?

Wow I just love this blog - you have such a diverse array of pieces to look at. This one is just beautiful - very lyrical and graceful.

DUDE!!!
That is awesome work man! I just love how you find the right space and shapes to say so much in the figure. Big fan here!

that must be the fry's in san marcos, awesome place!