Next up - Bombman. The only Megaman villain (at least in the first game) to have a mowhawk. That's pretty badass. When looking through ref for Bombman, he also had a weird beak - not cool. I want no beaks happening on my spinoffs, but to honor that design choice, I did protrude his lip, which I reserve for this's and thats.

I also designed him with robo-tennis shoes and a wrestling singlet. I think that's what they're called. He just had that jock sort of look to me. Shoulder pads, shoes, and ears all have a chiseled sort of bomb feeling to them. I had added wicks at some point, but they didn't look hard enough for our Bombman fellow.

He should be followed soon by the ever popular but inexplicably named "Gutsman". He will be bigger beefier and a little meaner looking than the rest. Kind of like a CAT truck on toothpicks, but for now, enjoy Bombman. 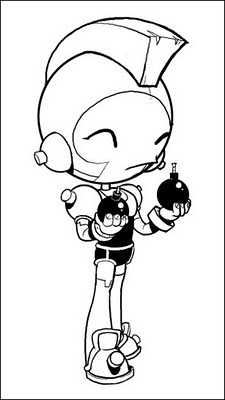