The Metroid: the Other Other M 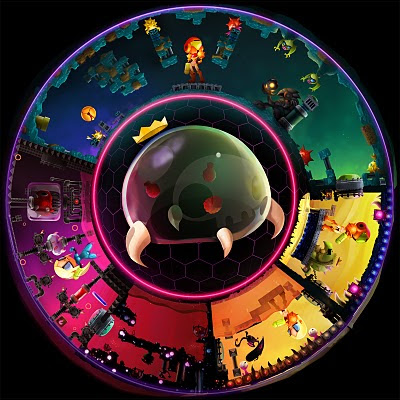 For those of you who haven't played the original metroid - it was totally rad. gameplay, art, and music were all really good compared to what was out at the time. i had never seen anything like it when i was a wee lad.

i pay tribute to metroid, it seems, ever year or so. this is the current piece. it's a repaint of the major scenes in the game. it doesn't go down JUST LIKE THAT, but well, hey, artistic license and whatnot - plus it's a color wheel.

i don't wanna hear any complaining that it's not accurate or it doesn't follow the direction of metroid cause, for f_ck's sake, i don't even think Samus was really supposed to be a girl in the first place. there would be fair argument that from one game to the next there's bad continuity.

you guys (girls) played the Other M? It's not bueno. Sorry. i've read better stories off of a bazooka joe wrapper and seen cooler characters on cereal boxes. eh - metroid (and super metroid AND prime) are still hot to death. And I have nothing but love for the franchise. But ya, if I was in charge of a reboot, I'd make it cartoony and as colorful as hell and Samus wouldn't say a damn word.

be seeing you,
&Rew.

Ahaha, the composition of this work is awesome, it literally makes my eyes and head spin looking at it, in a good way of course not a frustrating way.

And ya I played the new metroid also, the story is damn awful, Samus is supposed to be a badass and not to take orders from no chumps! I mean she's a freaking killer and always leaves a trail of death behind her every game. I was cringing as they ruined everything haha.

I totally agree with you making the next metroid, you are obviously one of the true metroid fans that knows WTF it's all about!

Why would anyone complaint about... well I did have complaints even for game-related art names for not being "accurated to the game". Well, screw that!

All I know is that this is beatifully executed, and apart from that, color wheel idea is a gorgeous touch, I must admait hat I didn't get it until I read your description, which was lame of my part.

I did like Other M, but get your point, is not the best metroid, and a cartoony one would be real bad assery.

By the way... don't know is a dumb question... but about your book, is that shipping for international orders or just in the US?

Samolo 'the forgotten kingdom' goes for 10$ + 5$ shipping - i've been charging a flat rate on that. To some customers (many us ones) it costs a little less to ship to. Other it costs a little more for me (internationals). it's been balancing out. As long as the shipping isn't too crazy then 15$ is fine. I'm not trying to get rich, just share art. (^__^)

Sweet! I been saving some bucks to buy artbooks from a while, but I'm careful of when to buy 'em cause I have to buy all together for the shipping, but I really want yours... is that rate ok for shipping to Veracruz, Mexico? Let me know, I would love to have it! your work is truly amazing!

Cool cool Samolo - well if you order both of the books I've linked off my site, I'll make sure the shipping isn't too harsh on you and I'll doodle in the books too!

just wanted to say this piece looks awesome! looks like an immense amount of work went into it.

We can buys printz?

After seeing your Metroid:Other M piece, I decided to spend the past few days glued to my Wii, and have finally completed it.

Here's what I have to say... I loved it. I thought the gameplay was sexy, the story was sexy (if not a little laborious at points) and the weapons were sexy. Switching between FP and 2D with a flick of the remote.... sexy.

So, maybe the use of 'sexy' wouldn't be the first choice of word, but it was the lowest common denominator that I could think of.

Maybe it's time that I checked out the other 11 versions of this game.

Glad the piece inspired you holmes.

Other M was hard for me to swallow after playing through every metroid ever. (^__^) But I'll bet it will be the other way around for you, as if you played through wii then all the GCs (ported to wii) then the GBAs and then the super nes, then the GB, then the Nes. THAT would be crazy.

But you wouldn't have to try the pinball game or hunters on the GBDS, because in my opinion those are fringe what with MultiPlay and all it doesn't fir the build.

I loved Other M. So many other games have worse stories and no one pitches a fit. Combat was great and just played great.

not completely hating on it er anything Adam. Better than tons of games out thurr, but samus opened her mouth and my sorrow began to mount. (>___<)

I gotta get my gripes out someplace!

I'm a huge fan of metroid I'd probably play it all day by eating only breakfast. I've beat zero mission and I'm working on fusion right now. The spider boss is hard in fusion. for a second I thought ign messed up on the walkthrough, then I read it again and got confused, FINNALY I understood it.

bro.. any chance you're selling prints?? wife's birthday is coming up, and she'd totally dig this.

I think I understand what you're saying about Metroid and Metroid fusion. All of the games and Samus are amazing. I really like the character and make art and pinup about it. I even make prints occasionally. Andrew Wilson &Rew.