i was watching T.V. last night and thought, "since i've finished the pieces for Tuesday's show, i deserve a break from traditional media for a day before i start on next month's show's pieces."

my second thought was about coconut shakes, but somewhere in between the darkness in my head and the warn glow of the television set, the word "shake" was transformed into "snake".

i hadn't much thought about "coconut shakes" before last night, but to claim that now would be a damn lie.

so here's an illustration of a coconut snake. i suppose you could call this exercising demons. why waste such a bad idea and keep it to myself? 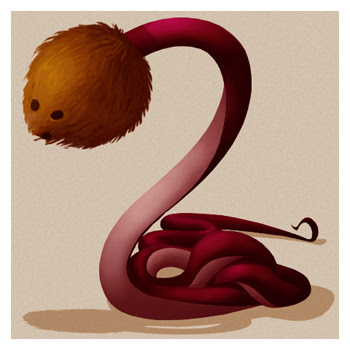 You're character design is so beautiful! Simple yet intricate. Nice stuff!