Something you can get your mitts on!

Ok, so I'm really bad at making money through my personal art. That's no surprise, many peeps ask me if they can purchase anything and I'm always like, "Duuuuuh"...

Here's the deal - I DO sell stuff. Mostly at Conventions (San Diego Comic Con, Seattle Emerald City Con, and Calgary Expo). I also do art shows all the time mostly at Gallery 1988 in LA. I will tell you that the print I'm selling through Gallery1988 in LA is literally the best piece I've ever done, and it printed better than any art I've ever printed, and most other art I've seen printed. So you're going to want to get your hands on it. It's limited to 88 signed/numbered pieces. I'll post it up closer to the show release, along with the sketch so you can see that stuff.

Also, I'm doing figures through Squid Kids Ink. Nate invited me to design 2 figures and also do prints for them, which I've posted in the past, but the figures are almost finished being produced.

Here's a piece in the upcoming squid kids ink endeavor. I'll post pictures of the finished figure when it's wrapped. The figures are also to be released limited, so IF you want one, you'll have to jump on it quickish. 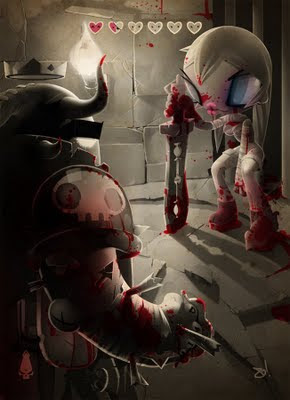 At any rate, I do have stuff out there and I usually link to the shows and whatnot. (^__^) I will oneday have an online gallery but the last guy I worked with to help me build something cool stopped short about 20% of the way through the process. And it always seems like it's impossible to do anything other than blog.

I appreciate the support and all of your kind words.

(and yes deboda, I know you don't read.)

You mean this print?
http://nineteeneightyeight.com/index.php/prints/prints-andrewwilson-crazy4cultposter.html

Holy jebus, how long did that take you, months?

Am ordering one now.

Do want! How do we eastcoasters(...we sound like something to rest a drink upon >_< ) Get some of that schewwt schweet schwaggity &Drew Schwag?

Kleer, no, it's a NEW one. It's about a million times better than that one. Although they both took me about a month. I am rather fond of that old piece those and picking it up for cheaps is a steal. :)

Dæth, I'll post up links to places where stuff can be ordered (and then beg people to order them)