I do believe this m_ther f_cker was supposed to be the first megaman. He was Dr. Light's unstable prototype. Megaman's older brother if you will. 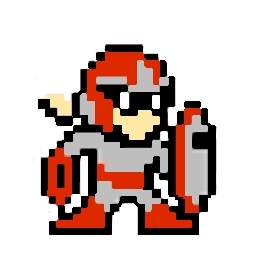 A few things about protoman according to me.

1. I never really liked him. He was a prick. He'd bounce in talk shit and bail. Not cool.
2. He looked like he had a pony tail and shades. Ok - well, I don't want to offend all you men with blonde ponytails and shades and helmets... but it's not a good combo. It reinforces number one item - the prick thing.
3. How could you go from a prototype with a shield to not-a-shield? Also, with robots, why not make the chest out of the same material as a shield, thus making the shield redundant but the protection integrated? 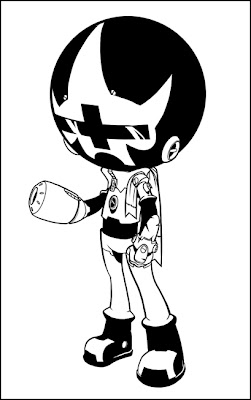 I made this proto look a little darker, but I left the scarf. While not altogether too cool, I got rid of the damned shield but gave him an itty bitty forearm thing. Sure, you can use that as a shield. You're a robot, block with precision dammit.

Also, the chest dial is sort of a zero with a line through it, like how I draw a zero, cause unit 0 is the first in a series usually. His glasses are in a cross shape, cause he always comes to save the day, plus he's going to be red and white like an ambulance.

I never got too far into the lore but I think he's an anti hero. Also his whistle was not as cool as a theme could be mind you. If I wrote music I'd do something more interesting. Maybe something like this:

What? What the f_ck? Aesop Rock, the theme to a megaman anti-hero? Well, why the f_ck not?