Art Director for a day

¿Do you like my art style, but wish I'd paint something really specific to your tastes?
¿Do you wish that I'd paint what was in your head instead of what's in mine?
¿Do you see my doodles and think, "You idjit, why didn't you do it like THIS?"

That leads right into my next offer:
A friend mentioned to me that it would be cool to hold a contest on my blog to give away free art. As a matter of fact, two people have mention the idea this week. I'm going to do it. I don't really have much to give away right now. Instead, I'm going to give away art - the actual concept of art.

Send an email to: genie (at) fourthwish (dot) com

Tell me what you'd like me to paint and why the hell I should paint it for you. It can be anything you want. Just email me or post it into the comment field and be as detailed as you want. As terrible or as sweet as you'd like it. If it's really bad or really good though, I might BLAME you for making me draw it.

I'll pick the one that I think is the most interesting for me to work on.

I'll post my in progress shots of the painting, and you can tell me what I'm doing wrong the whole time. JUST LIKE AN ART DIRECTOR. When I'm done, I'll send you a nice pretty print of it and make sure the internet knows that we did it together.

And here are a few sketches I did for a painting I'm working on. It's what you can expect from the developmental stages of my paintings: 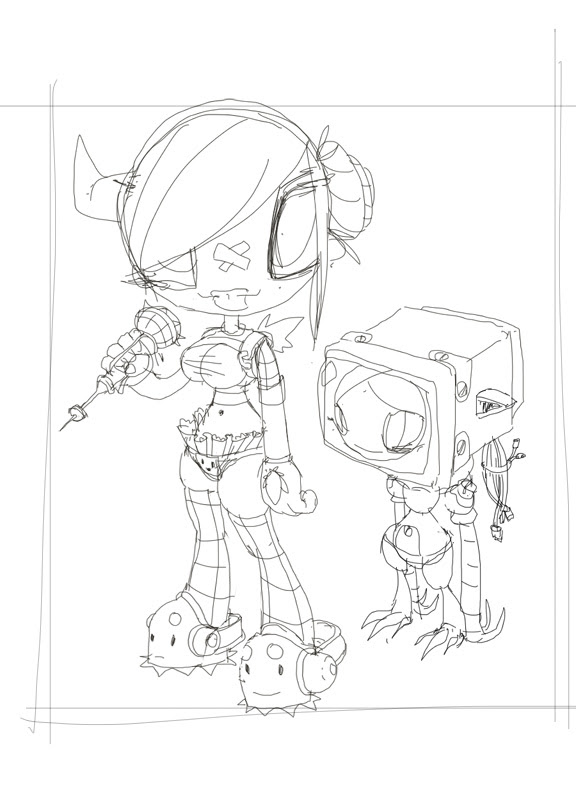 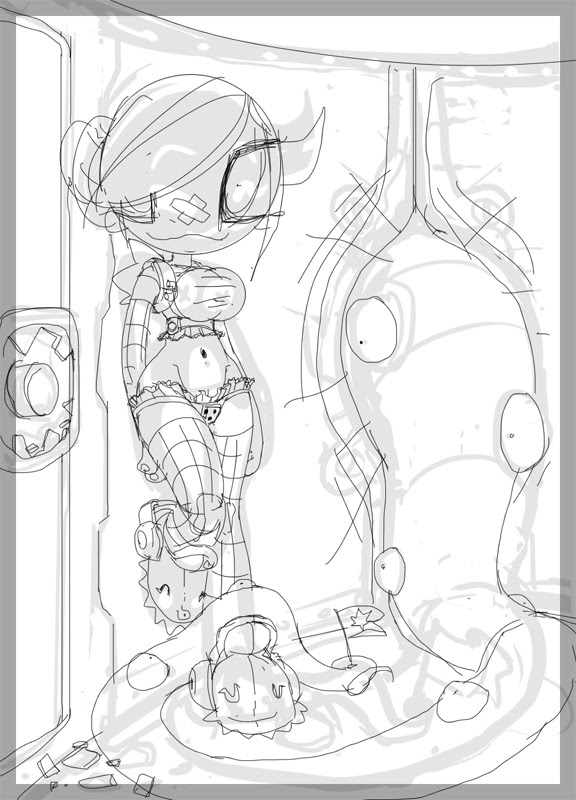 Legalese: I'm reserving the right to cancel if there's no interest, cause well, it only makes sense. Also, if it's super kickass and you make a million dollars of my art, i'll expect a check for most of it. (^__^)

Email ThisBlogThis!Share to TwitterShare to FacebookShare to Pinterest
Labels: art director for a day, contest, i must be crazy

I totally want you to have my art babies.

haha - AlanD. totally - I suppose that's exactly what this is about. Except Art Director for a Day sounds WAY different than, let's make art babies together.

With the new Alice in Wonderland movie opening soon, I think it would be very cool to see some of those characters in your unique style.
And while there's a bunch of characters to choose from, I'm thinking of Alice & Cheshire Cat in particular.

hi there, well man I just want to say I love ur artwork with that being said here's what I have in mind: i'm a graphic designer and consider myself to have decent drawing skills but sometimes my ideas don't match what I may have in mind..so I always wanted to a clockwork orange illustration but with a twist instead of the droogs, i'd have them be girls (droogettes)cool sexy babes with an attitude doing some of the ultraviolence as well..so that's what i thought...here's my flickr in the illustration set u'll see some of the concept art i did which never became the piece i intended
http://www.flickr.com/photos/williamvega/

Gottit guys. So far I have 6 entries and it's not even March yet. I might have to come up with something for the first couple runners up. I do have a ton of posters and some copies of my books laying around here somewhere if I dig through the rubble. Mayhaps I should offer those?

Here's another idea I know i already submited an idea but at the prospect of u giving out copies of ur books or posters...i have another one...if u could do an illustration of all the female characters from Quentin Tarantino films some of which u've done before, it's a very geeky wish..but something i would definitely love...

how do you gets your lines like that when doing lineart?

Hey dante - do you mean the skinny little lines or the fat soft ones behind?

Either way it's pretty simple, I sketch everything into the computer with wacom - the brush is a 1 pixel brush using the pencil tool. It's so I can get general shapes without going nutty. It doesn't look good so you release some of the stress of performance. You know?

The fat ones are with a pressure:size brush, so if I push hard it goes fat. Soft push will be skinny.

I hope that helps!

A Cute Dentist - they're alway portrayed as bad/sinister

okay i think you should do a roller derby poster. two hot chicks in skates getting ready to go at it. You can throw in my local derby team - the soul city sirens vs. whoever, maybe the Forgotten Kingdom Friends. Thats my entry.

I like it when you re-interept existing works in your style. It's one thing to be "original" but it's another level to take something familiar and then make it your own (He-Man, the Wizard of Oz etc...). My vote would be to take an existing childrens book and re-illustrate it. Hell, thats all Hollywood seems to want to do these days...poorly mind you. Here's my choices - goodnight moon, there's a monster at the end of this book, green eggs and ham (but THAT woudl be some serious deep waters).