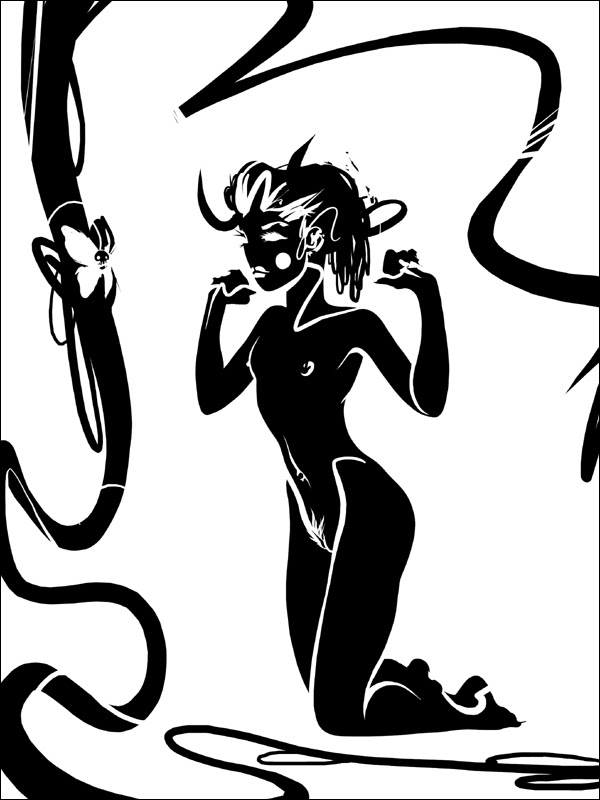 this is totally made up:

i met a girl who was an artist. after asking my opinion on a piece of artwork she had come somewhat close to finishing she insulted me. she asked what i had done that justified my advice, which was overly gracious and to no degree negative. i answered that i did art on a daily basis and studied it actively for many years of my life as well as do traditional work for a gallery.

R&B was playing in her apartment and it was 'round midnight. she was drunk and booty dancing.

she laughed and said "isn't it funny that i'm so much more talented than you, but you have shows?"

i broke eye contact with her at that point; to be civil and well tempered was a lie and i was soon to lie a great deal. i told her that she was entitled to her opinion and thanked for for showing me her den but i would be leaving.

she stopped me from going down the stairs and to my car and gave me a little bit more information about the relationship between her and i, which up to that point had been friendly acquaintances but would presently change to something far less comfortable.

"i'm one step up from you, but i'm willing to come down."

at that point she could have been literal, as i was one step down the steps and headed slowly towards the car, but this deer-against-speeding-motorcar had to be watched for at least a few more syllables. i was enjoying it for the tale that it had already become.

i walked down the stairs and said something lame like "maybe i'll ask for you for christmas."

we said our goodbyes and i climbed into my car, pleased with the situation for the merit of it entertaining outcome, knowing that this single situation would one day help me make new friends or a lover or entertain a lonely soul or mortal enemy.

at least i now know my place on this earth: i'm one level beneath drunken embarassing egomania, and that is just fine by me.

great story. it's amazing how little a person can be and not even realize.

bravo on your exit.

hahaha... the story gets better everytime its re-told! the sad thing is i can actually picture the situation seeing how i have been in that den when the r&b + booty dancing has taken place! amazing

Nice girl (in the drawing)...scary butterfly!

allen - thank you kindly, sir. i assure you, this particularly butterfly is as harmless as any.

I would have probably shagged her but would have been really crap on purpose.
(Normaly I'm crap by accident)