it has probably been one hundred years since i last heard the story, but today i thought of the emperor's new clothes.

it's a story about a naked guy who pretty much gets tricked into being naked and everyone just kinda goes along with it - till a little kid says "what are you doing naked? your new clothes aren't clothes at all!"

i don't remember if anybody got beheaded or thrown in jail or anything, but i thought to myself, "what a fantastic story". this sort of thing happens all the time. it's a metaphor.

maybe i've got it all wrong.

i don't really even remember the story except the king is nude and everybody just kind of shines him on so they won't get into trouble.

i'll have to look that story up and read it again. i think it was a good one.

but don't take my word for it. that's sort of the lesson to be learned, right? 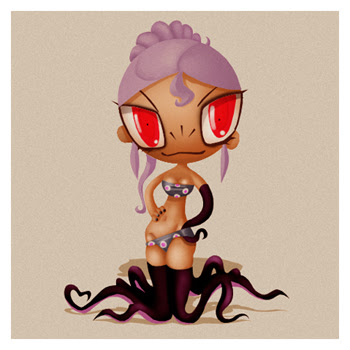 Yeah, I remember that story from when I was little kid.. I had a disney version in book form, where the emperor was a lion that that looked like king richard from Robin Hood...

I love the post-it pet..

I like very much your work!
It´s great, the characters are awesome!
I´ll link your blog ^.^